The 2018-19 OHL season is officially underway, meaning there is no better time than the present to meet October’s Top-20 OHL Draft eligible prospects. 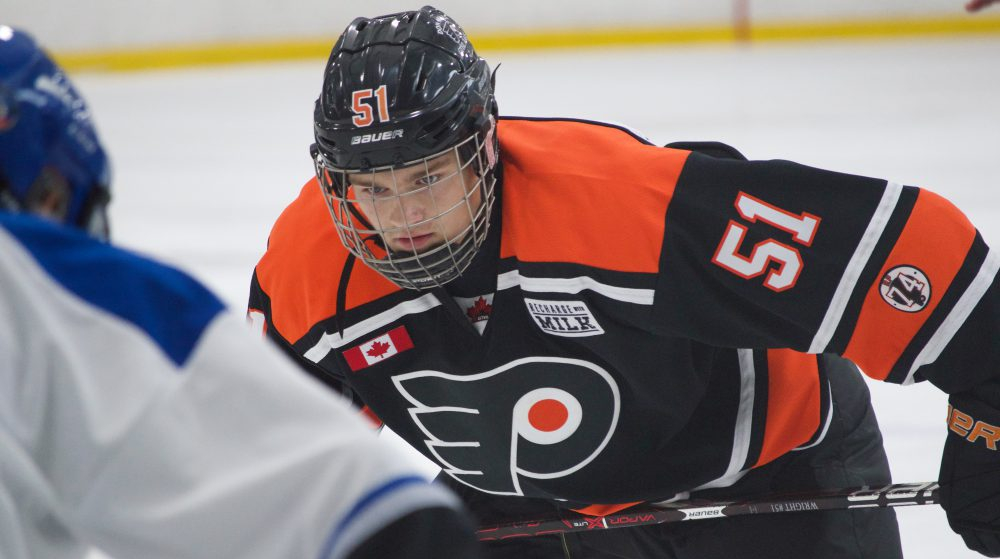 We are now one month into the 2018-19 Minor Midget AAA season and there are already plenty of headlines to jump on. After the Toronto Titans Early Bird Tournament unofficially kicked off the year, with the Don Mills Flyers coming away as dominant champions, each team has now played several games in their respective league’s regular season as well.

Of course, the majority of this year’s top prospects have gotten off to fast starts as expected, but a few lesser mentioned players are also quickly making a mark in their OHL Draft eligible campaign. As for the top teams across the province, the Don Mills Flyers have continued along their torrent path, jumping out to a 5-0-0 record in the GTHL. The Toronto Young Nationals remain the only other team with a perfect record in the league, while the Toronto Marlboros remain close behind.

Related: Look ahead to March, with our 2019 OHL Cup Ranking – October Edition

Over in the ETA, the Whitby Wildcats and Ajax-Pickering Raiders are off to the hottest starts, each led by a deep and potent offence, while the Niagara North Stars and Halton Hurricanes remain perfect in the SCTA. Meanwhile, the Waterloo Wolves and Kitchener Jr. Rangers currently lead the pack in goals for and in the standings in Alliance, while the Windsor Jr. Spitfires and Brantford 99ers are hot on their tails.

A few players have stood out in the early portion of the season and have drastically boosted their draft stock. Utilizing their hockey sense and offensive instincts, these three players in specific have done well to catch the eyes of scouts with a combination of blazing speed and elite shots.

McTavish is currently leading the HEO Midget AAA league with 16 points in 10 games as a member of the Pembroke Lumber Kings. In a league consisting of ’02 and ’03-born players, McTavish has been utterly dominant each game, showcasing a dynamic toolset including a pro-level release and tremendous physical abilities. Likely pushing for a top-5 selection, McTavish has surpassed Connor Lockhart as the HEO’s top prospect so far, boasting a mature game with game-breaking puck skills.

As a member of the modestly mediocre Toronto Red Wings, Pinelli can often be lost in the shadows. However, his immense talents will not be overlooked for long. A tremendous skater with impressive lower-body strength, Pinelli is a beast on the puck and shows a compete level that makes him a great leader on the ice. He is the complete offensive package and a five-tool center, and has shown flashes of an electric and powerful release as well.

Kressler instantly made his presence known at the Titans Early Bird Tournament, where he put on a clinic en route to posting four goals in four games. A smaller but speedy winger, Kressler shows a compete level second-to-none and isn’t afraid to drive the danger areas against larger opponents. His greatest asset by far is his shot, with a tremendous release and precise accuracy, Kressler can beat goaltenders clean with regularity.

With the 2019 OHL Draft just about six months away, there still remains plenty of time for variations to the October Rankings. In fact, one of the greatest assets that a prospect can show is year-round consistency, meaning that several second-tier prospects will have room to improve their draft stock simply by maintaining their pace of play throughout the rest of the season.

Related: Look back and compare to our 2019 OHL Draft Ranking: Pre-Season Top-10

Clearly, the Don Mills Flyers remain the team to beat across the province. Boasting a combined 13-0-0 record this season, the team possesses a great portion of this year’s top talent, highlighted by three of the top four prospects in our ranking. By the end of the season, they could easily have as many as five first round picks on their roster. As a result, they are unanimous favourites for the 2019 OHL Cup.