The 2018-19 OHL season is underway, and a slew of 2002-born rookies have wasted little time making an impact with their new teams. Check out the OHL’s top rookies thus far, here. 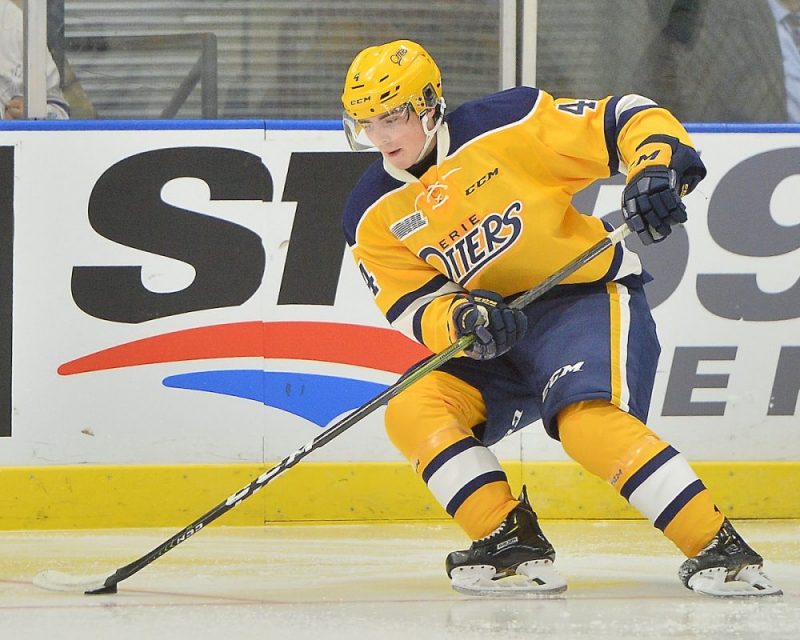 Although the 2018-19 Ontario Hockey League season is less than a month old, a number of highly talented young prospects have been quick to leave a lasting impression with their new franchises.

In particular has been the play of a slew of 2002-born prospects, all of which rookies within the OHL yet none of which overmatched or intimidated by their competition. To date, the likes of Jamie Drysdale, Cole Perfetti and Jean-Luc Foudy have displayed little issue in adapting to the OHL-level — regularly displaying high-end skill and confidence typically reserved for seasoned OHL veterans and elite NHL prospects.

As a result of this composure and creativity with the puck, these three youngsters above — in addition to a handful of others — have enjoyed torrent starts to their OHL careers. Whether it be elevated ice time, key situational play, or inflated point totals, a number of extremely talented 2002-born players have been significantly impressive thus far — a reality worth discussing.

This season’s class of OHL rookies is not only immensely talented but remarkably deep.

With at least one high-end prospect garnering significant ice time with each team in the OHL, it will prove to be extremely important to track the progress of these 2020 NHL Draft-eligible youngsters as the current campaign endures.

With this being said, let’s take a moment to catch up with a number of this year’s top 2002-born rookies as of the month of October, as their names and achievements are certainly worth noting.

Quinton Byfield began his OHL career with a bang, collecting three goals and six points in his team’s first five games played. However, as should be expected with all young players, Byfield fell into a funk following his initial outburst and failed to record a point in his following five games played. Yet, considering the incredible skill-set which Byfield possesses, don’t expect the Newmarket, Ontario native to be held off of the scoresheet for too long.

Boasting incredible high-end speed and a frame of NHL-size, Byfield is certifiably unstoppable once he gets moving with the puck and can generate a multitude of offensive opportunities as a result. What’s more is that Byfield owns a stellar shot and ample playmaking vision — two traits which combine to make him an elite force at the OHL-level at the age of just 16-years.

Yes, 10 points in his initial 12 games played was impressive, but expect much more from Byfield as the current campaign progresses.

Although he is not the biggest defender on the ice, Drysdale is consistently one of its most intelligent, creative, and confident players. In his short period of time at the OHL-level, Drysdale has carried over and improved upon the strong game which made him a standout for the Toronto Marlboros of the GTHL during the 2017-18 season.

Fleet-footed, daring, and calculated in his game, Drysdale has displayed the willingness to take chances for Erie in order to generate offence from the blue line. However, what separates Drysdale for his competition is the youngster’s ability to drive offence without posing a risk to the well-being of his defensive zone. Having recorded eight points in his first 10 games played with the Otters, Drysdale is quickly cementing his place as one of the top prospects available for the 2020 NHL Draft.

Some questioned the decision-making of the Windsor Spitfires when they selected Jean-Luc Foudy at 10th overall in the 2018 OHL Priority Selection. However, Foudy has quickly quieted all of his doubters through his exceptional play with the Spitfires to begin his rookie OHL campaign.

Tonight marks the first ever meeting between brothers Liam and Jean-Luc Foudy. pic.twitter.com/9ycPCZyYEP

A former star player for the Toronto Titans during the 2017-18 GTHL season, Foudy has taken his well-regarded work-ethic to the next level since his ascension to the OHL. As a tireless skater and relentless puck-hound, Foudy — like his older brother Liam — has quickly proven to be a crucial cog within the Spitfires’ torrent attack. Although he only scored one goal in his first 11 OHL contests, Foudy added eight assists and had generated an impressive point total nonetheless.

Cole Perfetti should have been the second player chosen in the 2018 OHL Priority Selection. However, due to outside circumstances, Perfetti fell to the Saginaw Spirit as the fifth-overall selection and it appears as though both parties could not be happier.

As consistent as they come and remarkably lethal, Perfetti is a strong player who boasts a professional-style of game. A standout with the Vaughan Kings of the GTHL last season, Perfetti has picked up right where he left off last campaign — easily dominating his opposition through calculated playmaking and intelligent positioning.

Cole Perfetti has the first goal of the OHL season, and it's an absolute snipe into the top corner. Nearly had a second later in the period. pic.twitter.com/dK1EE6scqk

In possession of an excellent shot as well as impeccable on-ice vision, Perfetti is a dual-threat who makes those around him better. This was proven quite blatantly to begin the 2018-19 OHL season, as Perfetti notched seven goals and 11 points in his first 12 games played with the Spirit. In the long-term, Perfetti could very well develop into the best player chosen in the 2018 OHL Priority Selection, as his game could overtake that of Byfield’s in the not-so-distant future.

The Sarnia Sting could boast the steal of the 2018 OHL Priority Selection.

Although chosen 19th overall, Jacob Perreault has wasted little time acclimating himself to the OHL-level. After cracking the Sting’s roster to begin the season, Perreault embarked upon a goal-scoring rampage — picking up six goals and adding another three assists in his first 10 OHL games played.

Well-known for his blistering speed, Perreault’s unique combination of size, strength, and skating ability combine to make him an intimidating threat on a nightly basis. The son of former NHLer Yanick, Perreault owns strong hockey bloodlines and the will to carve his own path at the OHL-level. A former star player with the Chicago Mission, it will extremely interesting to see whether or not Perreault can maintain his impressive level of play over the course of the 2018-19 campaign.