Connor McMichael of the OHL’s London Knights has risen dramatically over the course of the 2018-19 season. Once perceived as a mid-round prospect, McMichael has exploded into a potential top-10 choice. 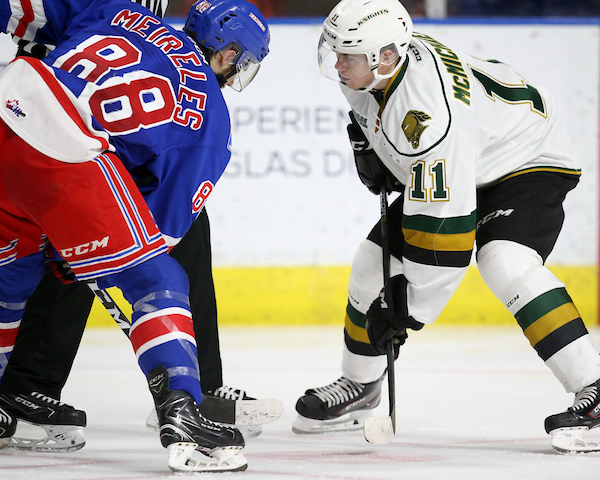 Although he began the 2018-19 season as a prospect widely projected to be selected outside of the first round, Connor McMichael has progressed by leaps and bounds throughout the campaign proceeding the 2019 NHL Draft, and now stands as a sure-fire top-31 choice as a result.

A fixture within an increasingly dynamic London Knights offence, McMichael has quickly becoming a driving force for the Knights and one capable of leading his team to success with an impressive level of consistency. Defined by his skating, McMichael is an electrifying presence who can burn his opponents with speed and pick apart their defences owing to his versatile skill-set.

What’s more is that McMichael boasts a level of drive and determination which stands high above the vast majority of his competition. As an extremely passionate player who strives to succeed on a game-by-game basis, McMichael and his lethal skill-set could push him into the top-10 overall if not higher come the 2019 NHL Draft in June.

As alluded to above, McMichael is a player who is driven and defined by his skating abilities. In fact, not only does McMichael feature eye-watering acceleration and breakaway speed but the youngster displays a level of edge-work and agility typically reserved for players at the professional-level.

It is McMichael’s wheels which stand as the foundation of his game, as the native of Ajax, Ontario’s natural offensive instincts and creativity derive directly from his speed throughout the ice. Able to create a great deal of time and space for himself owing to his skating, McMichael can craft deadly plays in the opposing zone and is consistent in his ability to execute at even-strength as well as on the man-advantage.

Perhaps the two most important facets of McMichael’s game, however, are his unwavering drive and determination. A tireless skater and one fuelled by his personal production and the success of his team, McMichael exudes an overwhelming amount of passion and emotion on the ice and is controlled in doing so.

To be quite honest, there isn’t a ton of room for improvement within McMichael’s game — he is simply that good and as well-rounded as they come.

In the years ahead, McMichael will do well to add greater muscle to his frame. Now, this is not to say that McMichael is under-sized or weak by any means, but rather that he will be able to better maximize his skill-set once he becomes a stronger player physically — especially down low. A direct outcome of adding greater strength will be McMichael’s increased ability to protect the puck — greater lower-body strength will allow the youngster to become a more potent puck-hound than he has already become.

Ultimately, McMichael could be one of the most under-appreciated players eligible for the 2019 NHL Draft.

Although many have projected McMichael to be chosen in the middle of the first round if not later, we could very well be looking at a top-10 choice come draft day given McMichael’s torrent production and continued improvement on the ice. With all of the skills which NHL franchises covet at the young age of just 18-years, McMichael could prove to be a steal if selected much earlier than anticipated.

To provide some similarity, recall the selections of Ty Dellandrea and Liam Foudy in the 2018 NHL Draft. Although projected as second-round talents, both prospects rose significantly into the first round owing to their exceptional skating abilities, consistency, and unquestionable work-ethic.